Pre-Season Surrenders Are Now Being Accepted 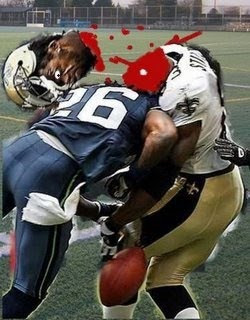 Clearly a little short on sports experience and knowledge (I once played a really, really long game of marbles, but I’m very rusty and out-of-shape now), I’ve decided to abandon the football aspect entirely and pour all my efforts into the ‘fantasy’ side.

So while all these other losers are studyin’ they're lil charts and graphs and watching padded glandular freaks run back and forth totally wreckin up somebody’s yard on television, I will be 'fantasizing' about endorsement deals, product lines, and above all Victory. 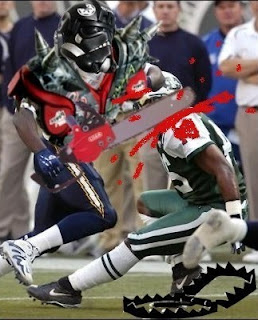 And don’t think I’m not ready for the ‘football’ thing either: my team has a bunch of guys on it (Ladainian is a guy’s name, right?), and I’m sure they will have no problem smacking just as many home runs out of the park as any of these other people.

But as a precaution, my guys will also have hydraulic diamond bonesaw jaws with razorwire braces, chainsaws for arms, and eat live kittens. And not 'cause there hungry either: they just eat kittens for the sheer amusement. Or like when you get invited to a 'brunch' and you already ate a stack of flapjacks so you eat something totally devoid of any calories or protein like a grapefruit just to fake it (because you have to eat something or everyone else will feel weird and uncomfortable eating in front of you), my guys would be spooning out live kittens sautéed in salted broken glass.

It starts with blood in your urine, and ends with a gun

Renal Failure knows all about fantasy, being the blog of wild fabrication and outright lies. Renal Failure also knows about football, as we can identify a football game when it shows up on the television. So using science and mathematics, we can conclude that Renal Failure will be your 1976 Avco Cup winners, also known as the Winnipeg Jets.

But teacher always said to show your work, and to give her ten inches, and so here's why you'll be seeing Renal Failure in the Winner's Circle with the Pennant wearing the Green Jacket...

Depth at Quarterback: Carson Palmer and Philip Rivers both have arms and hands, with which things can be hurled. Sometimes those things are fooballs. Other times it's ethnic slurs.

We'll be Receiving You Now: Larry Fitzgerald needs to catch lots of passes per game or children die. Hines Ward has an extra thumb on each hand for extra gripping power. Coming off the bench, Reggie Williams and Donte Stallworth have unhealthy fetishes for football leather. And feet.

There Will Be Running: Joseph Addai is what keeps defenses honest against Peyton Manning's vaunted passing attack. Maurice Jones-Drew can use his hypen as an extra blocker. Kevin Smith is very non-descript and thus no one will see him running the ball. And Chester Taylor not only runs on the field, he also runs for local political office. So Vote Taylor for County Selectman.

Other People with Hands: Todd Heap and L.J. Smith have small names, so inversely they have big hearts. Or a bigger chance of contracting monosyllabism. Or mononucleosis.

Important Feet: Rob Bironas once kicked 8 field goals in one game. And David Akers once kicked a panda in the groin.

The Best Offender is a Good Defender: Chicago and Philadelphia are traditional defensive powerhouses, and both cities are known for having signature food that can make your heart explode. And you can't score touchdowns if your heart looks like a Manwich.

And we reserve the right to play Renal Failure fixture Tag Larkin in any game he chooses. Because you don't put Tag Larkin the game. Tag Larkin puts the game in you.
Posted by renalfailure at 11:38 PM 2 comments: 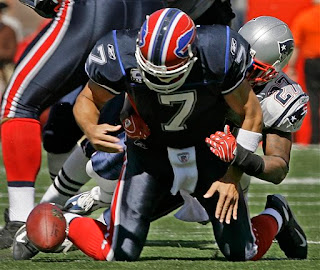 Sure, I'll admit that I've had lots of luck gambling on football in the past -- all of it bad. I could go on and on giving excuses but I'll offer only one: I'm a Bills fan. (I know, I know.) I mean, I've been a fan for a LONG time and I just cannot bring myself to give them up. They had me at hello, erm, I mean Thomas (Thurman) and Kelly (Jim). Anyway, its been a tough road and I've stuck with them through thin and thin. Same with fantasy football - I mean I watch football all the time - hell, I even do okay at pick 'em pools - but man, I SUCK at fantasy football. Well, here's my strategy - I play my best players all the time. Based on my success rate thus far I just know something is wrong with this strategy, I'm just not sure what. Anyway, I've decided to give it another shot and if I'm going to lose, it might as well be amongst a bunch of people who claim to have a sense of humour. (NOTE: I'm Canadian and refuse to spell it without a 'U' no matter what your stinking spellcheck says!) Okay, enough about me - with the draft now complete I would like to present your 2008 HBFFL Champions! (Oh, I also start every season SUPER confident - that way it hurts more as the season progresses - I'm a glutton for punishment):

(WAIT! One final note, I actually never do the whole 'research' thing so all my picks, like the post below is likely filled with gross misconceptions and inaccuracies. Sorry - that's the way I roll.)

2008 Roster - What the Canuck?
QB: TOM BRADY - Well, I'm certainly no Patriots fan but this guy is coming off a season where he set the record for most TDs thrown and spends his spare time impregnating supermodels. Book it. Done.
BACKUP: Brett Favre - I actually used to like this guy. No more. I mean, he had a chance to go out with class and he botched it, like so many before him. (I'm looking at you Emmett Smith.) Anyway, he's do for a bye week.

WR: REGGIE WAYNE - My sister-in-law lives in Indy so they have become my back-up favourite team, you know - to get me through the season.
MARVIN HARRISON - Another Colt, this guy is way old school. His younger brother may have went to high school with George Burns but he'll still snag a couple - wait and see.
LEE EVANS - Let's go Bills! Sadly, with no QB this one is a bit of a gamble but seeing as I'll be cheering for them anyway ...
BACKUP: Anthony Gonzales, Bobby Engram - I've nothing to add here. (Go Bills!)

TE: ANTONIO GATES - This guy is what is known as 'a stud'. I don't mean that he scores a lot off the field, although I suspect that may be true as well. The TE position is not one that gets a lot of Fantasy attention - but I'm real happy with this pick. On a side note, San Diego is the place where I saw my first (and only) Superbowl in person. If I told you that I watched Tampa Bay beat Oakland you might suspect it was decades ago, actually, it does kind of feel that way as well, maybe I'll look it up? Nah.
BACKUP: Greg Olsen - Who did what to the where now? Isn't he a basketball player? Meh, whatever ... let's move on.

K: STEPHEN GOSTOWSKI - Pfft. Kick the damn ball Nancy. (NOTE: Someone has to kick those extra points after those Brady touchdowns.)
BACKUP: Ryan Longwell - Another ex-Bill? Maybe. Anyway, see above.

DEF: BUFFALO - See, the smart money would be to pick the Broncos. I am not said money. That being said, the Bills D should be much better this year. (Why yes, I did say that last year - why do you ask?)
BACKUP: Denver - Better than the Bills in almost every category except for being the Bills.

Well, there you have it. I'm getting myself sized for my HBFFL Superbowl cockring as we speak. At least, I assume that is what the prize is. (Did I dream it?) I for one AM ready for some football! With two pick 'em pools, two fantasy pools and countless ProLine tickets - it is time for Canucklehead to cash in! (Once again, super confident to start.) To watch the complete and utter emotional breakdown of a grown man happen before your very eyes - follow the carnage as the season progresses over at my place. Until then, may the good football be yours - CHEERS! 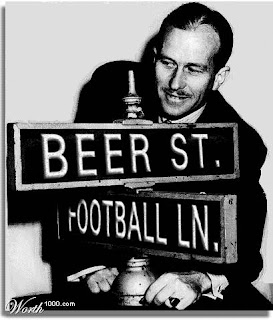 Posted by Canucklehead at 8:06 PM 2 comments:

Are You Ready for Some Fantasy Football??!! 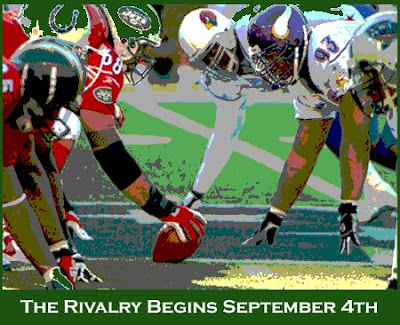 The Humor Bloggers Fantasy Football Season has kicked off and all ten teams are ready to go... 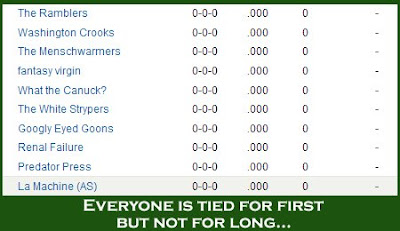 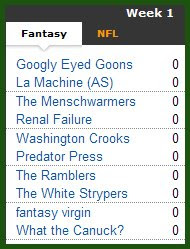 But I have to say The White Strypers' avatar is freakier then mine... 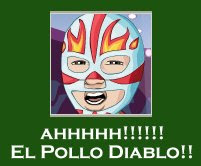 The blog of present and past humor bloggers involved in the quest of winning the HBFFL and taunting fellow owners at the same time.

If you need to contact HBFFL for any reason you can do so at chrisc447 at yahoo dot com.